Images, Part 2: Going Down the Ladder 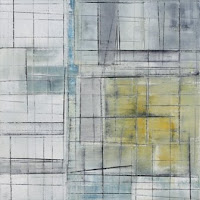 Creating images of things that can't be seen is a construction achieved without tools. Painters of abstraction rid themselves of the standard tools used to convey the seen, or communicate through recognizable forms, as they dig into a painting.
As art historian and critic James Elkins describes this, in his new book Six Stories from the End of Representation, he names the process: going down the ladder of disorder. "Rung by rung you go down, feeling your way, " he writes, "and with each step the techniques and skills used to represent the visible world become more distant...painting that is skeptical of realism works by subtracting strategies until nearly nothing remains."  With each step down, you discard. You go down the rungs, to maybe pure geometry, or color fields, and then -- down farther, into perhaps what memory looks like, but there is nothing of the seen world. Nothing of the world at all.
The piece at the top of this post, a painting of mine called Tethys, is named for the moon of Saturn of which we've only recently gotten close photographs. The photograph below is actually a mosaic image of the surface of Tethys, altered and enhanced by NASA in a variety of ways. What is the distinction between the two? Both are abstractions, true, but one is a manipulated image (created from a series of images) of an actual place and time. To me, seeing the surface of Tethys is a breathtaking and a beautiful thing, even if the real object has been enhanced. And by that I mean the idea of being able to see this distant moon is beautiful, not necessarily the image itself; this is the product of a great act of imagination. 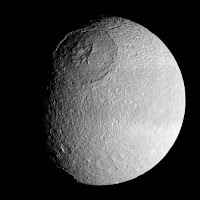 Images of Tethys present new, provable and true facts (Tethys is pock-marked, and is a known size, and has a crater) to us, and these are to be taken as true, even though no human has ever been to Tethys, and the images are spliced, colorized, etc. The "taken as true" part is the beam that supports representation in art, even when it veers slightly into abstraction, as do these images of Tethys. As Elkins puts it, "The history of Christian representations of the divine is adequate testimony to that. The vestments God wears in heaven, the scrolls of the heavenly vault...the iridescent wings of angels..." People have always painted things they cannot have actually seen, but representational work claims that the content can and should be taken as true.
What was I considering when I painted Tethys? At the moment I painted it, several years ago, I had just read about the images of the place, and had not seen any. So I know I was not informed by the visual. I read about the act of imagination that got the Cassini-Huygens probe out into space and on its journey to take images of all the moons around Saturn, and thought about what that means, and the hopefulness of that act.
I thought about places no one alive will ever see, including the incomprehensible past, which we know happened nonetheless, and of endless space, which is holding us here. And I wondered about what the thoughts must be like for those scientists and engineers involved in this exploration -- how they must have a sense of connection to the places the probe goes, though they are only connected to here. Only a flying camera is connected to there. And isn't that a strange abstraction...
I did not think about the place, but rather, about imagining the place. I can never know what it really looks like, no more than I can know how the scrolls of the heavenly vault read...or what my parents felt the moment they met, though I am a provable and true fact of that union.
A childhood friend of mine jumped off a bridge when she was 15 years old. What do we fasten onto? Memories of her, objects, ideas about what she meant, felt like, to others? What if the real act of knowing is that very act of imagining what her mind was doing at the moment she jumped? Not the moment she chose to, but the moment of falling, and knowing she was falling.
Nothing in what I paint -- about a distant moon or about another person's very last idea -- can be taken as true other than my intention to paint. Perhaps that is an unimaginable abstraction? Or is the terrain of the mind as mundane and knowable as the oxidizing surface of Mars?