Henry O. Tanner was a hellishly good painter, and like Barack Obama, a barrier-breaker: Tanner was the first black man accepted into the Philadelphia Academy of the Fine Arts, about 30 years after the Civil War. His experience of the irrational racism so pervasive in America drove him abroad, however, and he spent much of his life painting in France.

Tanner is regarded as a mystic realist, a painter who preferred subject matter that was religious and frankly spiritual. He was a naturalist representational artist who also worked deftly with tone, light, and abstract themes, which is why I so appreciate him - - and why I thought of him last week as Obama tangled with race, Wright, and the media.

What I reflected on most last week was Tanner’s remarkable 1898 painting “The Annunciation”, which hangs in the Philadelphia Museum of Art. I visit his painting each time I am in that city and have a small print of it at home. So compelling is the image, I have been working lately on a response, on my own abstract interpretation of what I see in his canvas, in my studio. 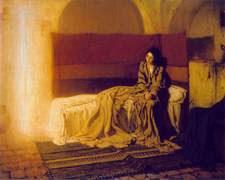 So too the news media - - and most sentient beings engaged in the political process - - have been working feverishly on responses to Obama’s abstract interpretations on race, racism, and the distinctions between his and Reverend Wright’s generational experiences of same.

Tanner was born just as the Civil War ripped open the country, and spent most of his youth in Philadelphia. His father was a well-known minister, his mother an escaped slave. That Tanner reached the heights he did creatively as a black man in post-war America is remarkable; that he had to go to another country to be recognized for his achievements is no surprise.
About eighty years later, Reverend Jeremiah Wright was born in Philadelphia and he spent his formative adult years navigating a post-war America as well, cementing his career in a country and a city shaped and defined by racial division. Barack Obama, in contrast, has grown up in a time of relative peace and in an amalgam of racial and cultural environments both within and outside of this country.

For me the intersection of their experiences connects vividly to what I see expressed in Tanner’s “The Annunciation”. It is obvious from his work that Tanner was truly devout and had a deeply Christian sensibility, and obvious from his life story that he was also acutely aware of perceptions of race. The religious story Tanner captured in “The Annunciation” is the moment when Mary receives the word from the angel Gabriel that she will be the mother of Jesus. She is portrayed, as many Tanner subjects are, in a natural setting; she sits on the edge of a bed in a small room hung with a colorful carpet, a room framed and decorated in non-western style. She is a small, young, obviously non-white-European version of the Virgin Mary. And, also like other Tanner subjects, she is portrayed as a humble supplicant, a Mary with no halo. The painting reveals that there is a force at work in Mary’s life, in her room in fact, that is entirely beyond her control or comprehension. This is the moment that she must consciously give up her free will, and she must give that will up to an unstoppable force. She was born into the arrangement, apparently; she has absolutely no choice; she is a slave. Faith must carry her. And I imagine faith is what carried Tanner through as well - - that, and a life abroad spent in more diverse and accepting cultures than our own.

Wright expresses his righteous indignation in his sermons, his absolute determination to be fiercely black and unabashedly Christian, in response to the unstoppable force of racism that has so permeated his life and the lives of his congregants. But he is also, in his way, a humble supplicant; he was born into the arrangement as well. He can’t be non-black in the embattled, segregated country in which he has lived. I appreciate his expressions of will against that force of racial division; his statements are a reflection of his life and faith experiences. Yet Wright is still not the driver of his own fate. Seen as a representative of his generation, of those who came of age as the fight for basic rights came to the fore in America, there has always been a force at work in his life that is beyond his control, that has been perpetrated upon him, that he has been challenged to bend and obey to.

Obama has been spared some of this, simply by the timing of his birth and his parentage; that he lands on the world stage almost 150 years after the Civil War and almost 50 years after pivotal Civil Rights battles were fought means his outlook is distinct from Wright’s, or Tanner’s. Barack Obama is also much less devout than either man. And that is where the connection is, for me as the viewer, listener, and witness.

Tanner relied on his faith and expressed it through his work; Wright has made a living through direct proclamation of his faith. Tanner’s Mary sits awaiting her fate, powerless to stop it or change it; Wright rants against those who would demonize his race or his expression of faith, and yet the media make him powerless by doing just that. When Barack Obama spoke on race last week, and addressed his pastor’s opinions, he spoke as an intact, not-intimidated person. Obama spoke as a person whose path, future, and will were assuredly his own, not as reflective of one race or of one religious view. And, given that I am only a few years younger that Obama, I found his pragmatic perspective entirely familiar.

When reading Wright’s sermons, I think that his views make sense in the context of his life, which is of course different than my own but nonetheless comprehensible. His passion makes sense to me. When I look at Tanner’s “The Annunciation” I am profoundly respectful of both his painterly skill and of his beliefs, but I also see what I see because of what has shaped me. I am a white female with no religious inclinations whatsoever, a well-educated Generation X-er who is acclimated to a diverse world where capital is a greater force than faith.

And when I view Tanner’s Mary, sitting there helplessly on her bed, I see that what the painter has portrayed is the incredible force of fear in the abstract. He has painted the moment before a rape. It is a vivid, dreadful, real and intense painting of something Tanner knew and lived through - - absolute victimization.
Posted by Martha Hope Carey at 3:00 PM