In a scene in a recent chick flick, Hugh Grant’s character says salaciously that he enjoys painter John Currin’s work because it has “the perv thing.” It’s a memorable moment in the otherwise forgettable film -- bad boy narcissist swaggers through a gallery filled with Currin’s overtly sexualized portraits of huge-breasted, wide-eyed women and sings the praises of his perceived brother in arms. It’s also an ironic scene, for those art critics who see Currin’s work as his indictment of our culture’s continual objectification of women. Grant’s character, apparently, just sees the breasts.

People often try to identify, or identify with, an artist’s ‘thing’ - - their method or subject or mindset, and critics often ascribe motivation to artists, where there really is little evidence 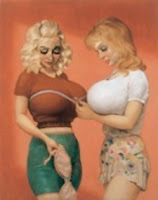 of its existence. Why Currin would choose to spend his working life trying to make the point that we objectify women by painting grotesquely exaggerated females that look just like all the women we see objectified in the media every day is a question only a critic can answer. As an artist, I think this critical assessment is a little off.
Currin has gained renown for his method as well as his subject matter. He mixes his own paints and preparations, using the processes of an artist from a previous century, and this ‘method thing’ adds to his appeal for collectors. He is a very successful painter. He also quite obviously is a bit of an obsessive and has some serious issues about sex and women that likely need working out. But I for one do not think he is presenting his images for a larger political or sociological purpose (and he himself does not claim to). Currin just seems to like to abstract and morph the female form and capture this in paint. Which is what painters do, after all; we use what we see, and we paint because it is what we enjoy. One could also say Currin visually prefers the abstracted and morphed female form and, much like Hugh Hefner, has made a living expressing this preference.
The need to know about an artist’s ‘thing’ seems to cloud the viewer’s perception of what they are actually seeing, and often clouds the context in which they are seeing it. I am still surprised at how often viewers of an artist’s work, including mine, get things wrong. I once had a studio showing where a visitor asked me, in all seriousness, to give him the nickel tour of the art history of my work - - who my influences were, whom I was most imitative of, what phases I had gone through, what phase I was in now. It was as if he had a standard artist questionnaire at the ready. A few years back at a solo show, a visitor asked her friend if she had seen my work before, and she rolled her eyes, sighed dramatically and said “yes, I know her, she's the queen of the palette knife”. She thought she had identified my ‘method thing’.
Artists certainly comply with these requests and respond to these needs, because we tend to be sensitive types, or because for some, comprehensibility is a pathway to recognition. Regardless of how (or if) the artist responds, it is always the viewer who ascribes the ‘artist thing’-- usually for their own viewing comfort. And thinking about viewers ascribing and artists complying, and Currin’s objectifying of objectified subjects is what brings me to Emma Peel.

Diana Rigg gained fame by playing this catsuit-wearing main character in the mod 60’s television series “The Avengers” and set a certain standard as the ever unattainable femme object (who was so very good with karate and car engines). As a female viewer, I tend to ascribe ‘things’ like vivid intelligence and savvy to the character, but know in truth Mrs. Peel’s purpose is simply to present a female as object, as is the case with many of Currin’s subjects. She too is an abstracted and morphed female form, exaggerated by her clothing and her preternatural ability to leap over high walls with the grace of a ballerina. Mrs. Peel also functions as lovely visual contrast for her partner, the utterly unsexy but very well dressed Mr. Steed.
As regards my own artist ‘thing’ and interpretations thereof, it turns out that I never actually use palette knives in my work. I use almost every other kind of object though, including my fingers, brushes, wallboard scrapers, spackle knives, and a ruler on occasion. And when I really see the female object Emma Peel, I think many things, but mostly I think about the object that matters in my world - - I see her teased and sprayed 60’s hairdo (such stiff hair!) and think “I could make a brush out of that.”
Posted by Martha Hope Carey at 2:58 PM