The crazy-long 10,000 page ‘enormous theorem’ (a massive algebraic proof categorizing simple groups) is a mathematical method for analyzing abstract and physical systems that have symmetry. In mathematics and physics, symmetry is “a transformation or rearrangement of something that leaves it unchanged…The theory of relativity says that the transformation from one observer's point of view to another's may alter the values of some observations but will leave the laws relating those observations unchanged."

Perspectives change, but the song remains the same.

The enormous theorem identified all the mathematical building blocks from which all groups can be constructed, with the exception of 26 simple groups that did not fit into the theorem’s identifiable patterns. Thanks to this intellectual feat, “the principle that any fundamental physical theory must possess certain kinds of symmetry has become a scientific axiom.”

When Daniel Gorenstein, the father of the enormous theorem, published his work in 1982, mathematicians and academics around the world were immediately enthralled. And some immediately connected Gorenstein’s work with…God. One of the quotes I saw at the time was from a professor who said that to him, the enormous theorem was like the first proof, a balanced and beautiful geometric proof that God may have written as he was test-planning the creation of the universe.
About 1300 years before Gorenstein and his collaborators published their theorem, this symmetrical image was created to honor both St. Matthew and God (who apparently was the universe’s first geometer.) The image is from the Lindisfarne Gospels, an illustrated 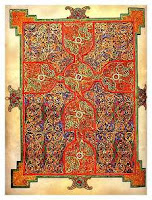 manuscript created by an early Christian bishop at the Lindisfarne monastery (the creepy ruins of which, located just off the Northumberland coast in northeast England, I have had the pleasure of wandering around.) The manuscript served to honor and preserve the ideal Christian church in a hostile world full of crazy Celtic pagans and invading Vikings.

As with any religious text, the author of the Lindisfarne Gospels followed church-sanctioned rules in his choices of script and illumination, symbol and illustration, many of which were also evident in Roman codexes written 100 years earlier. These rules of presentation placed an incredible value on visual symmetry and balance.

Taken as a whole, the illustrations in the Lindisfarne Gospels offer up their own visual ‘enormous theorem’ on how one should systematically convey (early Christian) religious experience, which is guided by unchanging laws and…symmetry.

Francis Collins is a scientist (now author of a book on God) who recently claimed to have found proof of God through Collins’ research on the ‘beautiful system’ of the human genome. This solid proof finally came to Collins many years after having a revelatory moment when he was hiking in the Cascades here in Washington. On that hike, he saw the natural ‘beauty of creation’ all around him and realized that denying a supernatural force was at work was, for him, now impossible. Of course, much of the beauty (systemic, symmetrical or otherwise) that Collins saw around him in the forests of the Cascades was likely second-growth trees planted and regulated by Weyerhaeuser’s minions...but I digress.

This week law enforcement officers raided the Fundamentalist Latter Day Saints compound in Texas, and the released 400 women and children living/held captive there. Daily life on the Texas compound (we now know from the victims) was as controlled and regimented an experience as prison life. Or monastic life. The women in particular in this FLDS church had to follow very specific rules, like not cutting their hair and marrying at puberty. The women were also admonished to not think, to not contradict or disagree with their religious leader/husband, or with any man, or any belief of the church -- they were to “stay sweet” in their minds and hearts at all times.

Francis Collins sees proof in patterns that God created the symmetry and beauty of the natural world and the beautiful symmetry of the human genome. The Lindisfarne Gospels offers us an instruction book for religious experience that claims to celebrate, through human artistic effort, the symmetry and balance of God’s ideal world. And a mathematics professor, reacting to the publication of a theorem that explicates the symmetry of most physical systems, claims it is an example of God’s prowess in geometry.

How these responses are any different than “staying sweet” is beyond me. Scientists and those of faith who hit against something complex yet orderly claim that this symmetry is just more obvious proof of God. The enormous theorem, in actuality, conveys just the opposite: natural, physical, and abstract systems contain symmetry as a basic attribute and finding the random outliers (or 26 simple groups) beyond that pattern is what really should give us pause, or make us dig deeper, or spark creative exploration.
But of course forcing order in the face of complexity has always been a form of refuge, especially in art. And I find that however much I am a contrarian, I’m a little mesmerized by this kind of thinking, especially as expressed in the work of painter Rudolph Bauer (who composed a number of his orderly geometric drawings while captive in a Nazi prison.) 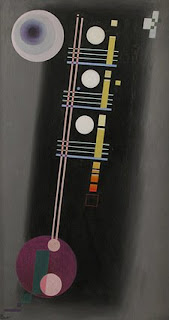 Bauer and other non-objectivist painters seem to have used art to ruthlessly and consciously redirect their attention away from the chaotic reality of a world at war. And I see in their artwork something very like the Lindisfarne illuminations (and in the psychotic control in the FLDS church and in God-is-the-explanation scientists like Francis Collins) -- evidence of that act of human will it takes to contain all curiosity and critical thought.

To think sweet, to say God is the answer, to paint the geometry of a mind strictly contained and rigidly conforming to aesthetic rules...I can imagine these all serve a purpose, are perhaps part of assuring your identity’s survival. One can imagine finding refuge in drawing geometric shapes if one were held in a Nazi prison, or in drawing endlessly repeated knot patterns in a manuscript while utterly alone in a cold and dark monastery. But using the ceremonial majuscule script in the illuminated Gospels is akin to (and just as practical as) requiring all women in your sect to wear dresses. Seeing symmetry and geometry in science as mystical and proceeding from a creator being is akin to claiming that the regulated forms used in a non-objectivist painting actually give access to some spiritual power.

What makes my head twist on all this is the question of what is accomplished by these limits, by mentally or creatively “staying sweet’? What is left when you get there? Entry to heaven for the select few? The promise of knowing something other minds do not? Seeing the hand of God in your very own scientific research? Claiming the supernatural in your own geometric patterns on paper or canvas?
How frighteningly, mind-numbingly narcissistic.