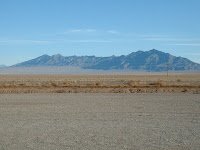 Kitsch is self-defining and self-completing; it is a kind of marker in visual history that is not in dialogue with any other creative expression. Though she was silent in my dream, verbally Sarah Palin is certainly melodramatic. And visually (consistently) she is a self-contained marker of an ideal of male-defined, outwardly virtuous femininity, in high heels and skirts. And possibly not much else.
Posted by Martha Hope Carey at 2:36 PM