An Order of Understanding 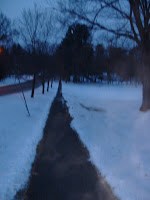 Poet Seamus Heaney’s description of the poet or artmaker is of a person engaged in the world of culture and who consequently has a particular “inner system or order of understanding.” For the audience or viewer to comprehend that artmaker’s creations at the present moment, Heaney says, it is “important to change the plane of regard and relocate ourselves in the world of culture -- in other words, not to respect the imperial drive…”

Virginia Woolf, in describing the impact that a novel leaves on the mind’s eye, said that it was a changing, dynamic “shape…not made by the relation of stone to stone, but by the relation of human being to human being. Thus a novel starts in us all sorts of antagonistic and opposed emotions. Life conflicts with something that is not life.”

My sister recently told me of an experience she had with an abstract painting -- that her primary response to it was to feel set outside of the order of understanding expressed (and thus to dismiss what she was seeing as superficial) and also to feel that very conflict Woolf describes. Wordless feeling can be threatening. I have heard this story before, and often.

In response to my sister whom I love, I have tried here to describe my own inner system, to describe what comes before the work of artmaking, and what is consequently imbued in the work:

All I have ever seen is in what I create, so history is always present in the work. Context matters. I don’t know anything outside of context.

I don’t hold in my mind anything concerning the perceived thoughts of others (materialism, comparison, competition, ambition) when working. If I do, what is created is shit, the shit of projection and assumption and other voices and disconnection.

I attend to my thoughts because they are purposeful for me, even if not directed to a productive end (whatever that means) and even if not expressed to another living person in words, so thoughts come up unbidden when working, as markers of emotional understanding, as confirmation of coherence.

I respond, unedited and unprotected, and with no shame, to what I witness, feel, and remember. About now or somewhere. About anything or anyone or that time.

And I translate my experience into an expressive form that uses no symbols and no words.

I find that the same phrase echoes in my head at some point, when I am truly in a painting -- the phrase “Every universe has its own laws.” So, I must be the author of that phrase.

Woolf also described writing a novel as a voice answering a voice, a sentiment that I imagine many artmakers can relate to. For Woolf, that connection implied some spirituality. For me, the answering voice is identity, or consciousness. Or, as Kokoschka said, it is conscience.
Posted by Martha Hope Carey at 1:10 AM