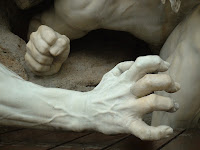 When I was a teenager I would sometimes go with my parents into the city to hear the New York Philharmonic perform, and I usually found the experience dislocating. I would try to center myself by calculating how many dead animal pelts were slung over the shoulders of the overly-made up women who clustered during intermission. During a performance of Bartok, I found the force of the music so intense that I started to pick incessantly at a small scab on my neck; I felt berated. But one evening, the Philharmonic played several Viennese waltzes, and for that performance my attention did not falter. About halfway through, something clicked, and I whispered excitedly to my Mom “Oh my god, this music is all about sex!” She gave a slight smile and whispered back “Yesssssssssssss.”

I thought I had decoded a meaning that must have been so obvious to everyone else listening, and was surprised and totally chagrined. 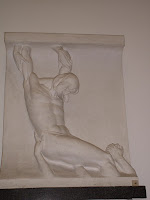 When I was somewhat younger and accompanied my mother and siblings to Catholic mass, I had a similar small epiphany about the bend of Christ’s neck. We’d see him every Sunday, hung on the crucifix above the altar, and it always struck me that the way his head hung down and slightly to the side was odd. He looked like he was asleep, or like he was crying, or like he was just really tired. And then one day it dawned on me, in that same embarrassed, everyone-must-know-this-but-me way, that in looking at the body of Christ on the cross, we were all just looking at a dead man. So…the bend of Jesus’ neck was just lifelessness, which meant that every week we knelt before and prayed about…death?

That was when I (finally) began to understand what a supplicant is, and the morose nature of Catholicism. The bomb-worshipers in "Beneath the Planet of the Apes" made a whole lot more sense at that moment, too. 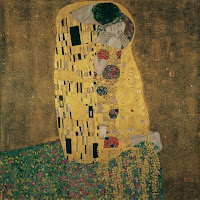 Spending time in Vienna recently, I felt that I re-encountered these two forms of code wherever I went. Strauss and his music are everywhere, as is the containment of sexual energy his waltzes describe. Vienna itself seems like the church of restraint. And the bent neck of Christ is everywhere too, in altar pieces in Catholic churches all over the city, and in the work of Austrian Expressionists who worked early in the last century. A fascinating small museum in the Augarten is filled with sculptures by Gustinus Ambrosi, who came to fame after winning an art competition with his bronze sculpture “Man with a Broken Neck.” Even Gustav Klimt’s famous “The Kiss”, which I was fortunate enough to see on display at the Belvedere Schloss, contains that famous bent neck, and a supplicant.

Klimt’s own description of what the neck means was sexual rather than religious --he apparently stated that the man’s neck represents the shaft of a penis, which puts the woman in the painting in rather a regrettable position -- but at a certain point in Vienna, as with the crucifixes and the waltzes, the two are just inextricably linked.

An artist did not need to be Catholic to catch the mood of somber deference to fate, and those like Gerstl, Kokoschka, and Schiele even placed themselves in the role of the dead Christ in some of their self-portraits. Nearly all of Schiele’s paintings conveyed to me this same fascination with and subservience to death, in fact, except perhaps his paintings of a six-year-old boy -- but even there, the message to the viewer seems to be “Eh, just give him time.”

These artists, who all were working in Vienna before WWI (and presented in the Leopold Museum’s amazing and thoughtful exhibition, ‘Vienna 1900’) were engaged in an anxious group response to modernity, what with Freud and Darwin reshaping thought about existence and industry and capitalism reshaping what had been a feudal society. And for reasons I am too limited to fathom, they all chose to paint a kind of hyper-realism, to focus on the basest parts of human life and the human form, instead of reaching into abstraction.

When I was in Vienna, I was lucky enough to see the first retrospective in Austria of work by French artist and creator of cubism Georges Braque, and I could not get over the contrast. The forms in the abstract expressions of Braque convey a sense of life, and real emotional openn

ess, and it seemed like Braque used color to imply memory or reflection or movement, or the absence of something, not anything concrete. Looking at the work of his Viennese contemporaries -- who were so ferociously committed to representation (and to representing the exposed self) -- I felt I was being scolded about my own mortality.

Or perhaps it was that I was a woman, looking at the work of Viennese painters who seemed to have a very singular view of what women are for? More on that in my next post…
Posted by Martha Hope Carey at 8:05 PM