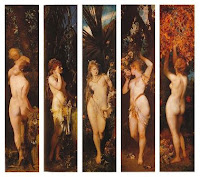 While I was trapped on the long and boring flight home from Austria, I watched the awful re-make of “The Women” on my tiny in-seat movie screen. Caricatures of female power and sexuality! Heel-wearing harpies, lingerie flashing, jungle-red nail polish! Self-awareness through hair straightening and tampon burning!

I felt sorry for actress Annette Benning, who also seemed trapped on a long and boring flight. And given what I had just seen in Vienna, I had to figure Freud would have lapped it all up.

My starting place for this reflection was the galleries of the Belvedere Schloss, which contains a remarkable collection of Austrian art, almost entirely by men, displayed in chronological order. Much of that art contains images of women or at least their component parts.

Austrian sentimentalist and artist Hans Makart liked ass, particularly the buxom, pear-shaped behinds of aristocratic white women. And Makart knew his audience, as his paintings of nymph-like ladies frolicking among grapevines were the popular porn/art in the 1870’s. But the soft beauty of the female form that for Makart was an allegory for a lyrical and romantic history of Vienna gave way, at the end of the 1800’s, to much more discomfiting presentations of Purposes for the Female.

These artists were, in their different ways, shocking the system; they refused to engage in making myths about Vienna’s past, and they connected ferociously to the new century and to their own id-ego-superego present. I’m sure people who are not me find the work I saw on display arousing. And as someone who works in paint, I was certainly awed by the artists’ skill and expressiveness. But as a viewer, even though I am conscious that what Freud theorized about female mental infirmity still impacts us generations later, seeing it front and center in secular art seemed to make the work very history-bound. This presentation of women as sex itself, dominated and unintelligent, just seemed archaic.

And then I saw Gunter Brus.

The retrospective of works on paper by contemporary illustrator/performance artist/lunatic Gunter Brus (who is referred to in the exhibition write-up as “one of the most important protagonists in Austrian modernity”) now on display at the MAK Museum in Vienna significantly raises that level of discomfort. The work includes some political cartoons, commentary, and wild drawings of dream states and strange creatures. But most of the work presents the viewer with ingenious ways to carve up a woman, starting with her genitalia - - or at least Brus’ violent fantasties about that idea.

Putting this all together, I think I began to understand something about oh-so-enlightened, cultured, modern Vienna.

My first day in the city was a Catholic holiday, the celebration of the immaculate conception…of the Virgin Mary. Yes, in the mid-1800’s the Catholic Church integrated a retroactive understanding of Mary the Asexual Mother as a product of immaculate conception herself. I sat in on part of a mass at St. Peter’s church and listened intently to the proclamation that the Holy Virgin was, unlike Eve, entirely free of sin. So Mary’s identity was defined by the very absence of sexuality itself. And as I listened to the mass, I thought maybe this was the starting point in a long unbroken line of presentations of Purposes for the Female, Viennese style.
Posted by Martha Hope Carey at 6:32 PM