Beneath Vienna’s Judenplatz and the Holocaust Survivor’s Memorial, in a large and dimly lit room, the 600-year old ruins of a Jewish synagogue are quietly preserved. A few blocks away, on the upper floor of the Jewi 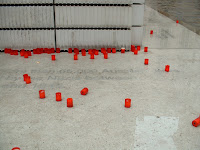 sh Museum, holograms provide interactive displays on the history of Jewish life in Vienna, including one that brings to imaginative life that medieval synagogue. And painted on the far wall of that same thoughtful gallery space there is a quote by philosopher Walter Benjamin: “The true picture of the past flits by. The past can be seized only as an image which flashes up at the instant when it can be recognized and is never seen again.”

Those words stuck with me as I wandered through other rooms in Vienna. And while I wandered, I came to understand that this city lives by holding time, uses both seriousness and force to fasten those flashes of the past to the present. Curator Edelbert Kob describes this as a consequence of “the politically motivated demolition of modernity in Austria.” It is as if a particular form of memory in Vienna will fade to black if not diligently attended to, and as if the denizens of the city still cannot be trusted to make their own moment.

This feeling was most intense at the Kunstschau 1908 re-creation, now on display at the Belvedere Schloss. The Kunstschau was an exhibition of new art and craft (paintings, glassware, bookcovers, posters, works in silver) put together by a group of modernist Viennese art makers to celebrate the 60th anniversary of Emperor Franz Joseph’s reign, and the installation was overseen by Gustav Klimt. Many pieces created for the 1908 exhibition have been collected and are on display again, 100 years later, including Bertold Loffler’s original exhibition poster, which looks contemporary.

The room that Klimt designed to display his own paintings within the 1908 exhibition has been reconstructed faithfully, and any of the original paintings which were subsequently lost or destroyed have been reproduced in black and white. The room is a study in balance and control, with white walls patterned with a small graphic designed by Klimt, and all the paintings sized and spaced perfectly, symmetrically. Klimt’s way of making only the human form three dimensional in his paintings and flattening out all else was fascinating up close, and makes a statement about representation, I guess. I imagine Klimt's brain and hands worked differently on objects than on flesh; he painted objects like a supreme craftsman and people like a passionless iconographer.

The control you see in his work is echoed in the exhibition layout, and in the work of other craftsmen represented, and echoed again in the slavish attention to detail in the re-creation of the exhibition itself. When you enter the 2008 exhibition space, there is a palpable force that seems to push you back, to the time just before (before the end of the monarchy, before we became the modern world that Klimt and his colleagues idealized, before the wars) and hold you firmly right there.

That same force is on display over at the Empire and Biedermeier Room in the MAK Museum, the Austrian museum of applied art. The room is filled with stunning Empire and Beidermeier-era furniture, including original models of what were some of the first mass produced pieces - - and the room is overlaid with laments. Artist Jenny Holzer installed electronic signs high on the walls of the Empire and Biedermeier Room and chose the text that scrolls across those signs. The texts she chose were written by those living in Germany/Austria in the 1820’s and 1830’s, writers who both lamented the introduction of industry as the end of beauty and natural order, and lamented the sorry state of the new working poor at the same time.

The Museum of the 20th Century (Moderner Kunst) contains an exhibition that is an homage to that museum’s founding director and curator, Werner Hoffman. On display in the exhibition are works by seemingly every male modern artist working since about 1905, collected in one large white room. The self-proclamations in that room, about forceful self-discovery and expression through the use of new art forms, are truly deafening. Hoffman himself wondered if the museum (particularly in Vienna in the 1960’s) was a cage rather than a wide-open forum for ideas. This exhibition felt like a display of the contents of a time capsule rather than a cage, and I again felt pulled in to space that was fastening the edited past forcibly to the present, with no actual relation to the present.

In the end, of course, the room I spent the most time in while in Vienna was the room of my mind. The last time I had spent days in that city, I was a 20-year old backpacker who was blissed-out by train travel and aloneness and the beauty of the Vienna State Opera Ballet’s performance of Orpheus and Eurydice. Back then, I was too naïve to even imagine the impact that death has on all of one’s feelings, thoughts, and decisions.

But I came to Vienna this time having experienced loss and grief, and so that desire to seize and hold the past motionless in the present which permeates every room in this bereaved city now seems, in some small way, recognizable.
Posted by Martha Hope Carey at 3:01 PM