In the Apparent World 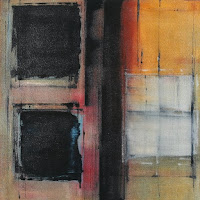 When I am not being particularly kind to myself, I get concerned with comprehensibility. A common enough activity, I suppose; people do seem to spend a great deal of time framing themselves for others. And reframing themselves, too.
When I am stuck in that, I tend to mentally categorize my work into pleasing, clear compartments -- paintings of places, paintings about people, etc. And as soon as I think that, I realize I've reduced the work down and it is now edible. In one bite. Three-course-dinner gum.
A sticky form of punishment, this creative self-reduction. And reducibility does not breed contentment, or promote more creativity, in my case. It just makes me feel dead.
Titles are tricky, then; I don't strive to be obtuse when I name work, I just tend to reach for something clear out of the nebula of thought and feeling and visual cues that make the work. At Deer Isle (above) is a good example.
The colors in this painting do not correspond to the colors of that place. When I first saw Deer Isle, Maine, the summer I was 14, it was a brilliant cloudless day, all blue sky and green trees. The colors and shapes in the work don't correspond, either, to the physical place I was in when I painted the piece decades later. If the work is about anything at all, it is about a moment of consciousness I had that day, sitting on a hill looking at the harbor.
When I got home from Maine that summer, I told my big sister Ann that I had figured something out about God on this trip, that I could now "get" why people believed God existed -- it was because such beautiful, idyllic places existed. This was not something I'd given much thought to previously, the why of belief. But I felt aware that summer of a way of thinking which I did not share, but could appreciate. Sort of like realizing what it is that two friends in love see in one another. A recognition that beauty could open up, and even sustain, a spiritual belief.

High school came, and I put that thought away for quite awhile -- another thing people do, often to our own detriment. But it reappeared when I was in my studio, about five years ago. I started thinking about the why of beliefs (any beliefs) and all of the moments and elements that cluster to form a sustaining idea.
If I believed in the spirituality of nature, that moment at Deer Isle would have been a springboard (and a reinforcement) to a lifetime of belief, since I spend a great deal of time in and observing the natural world. If I believed in a deity, the existence of this peaceful-looking place, aglow in the summer light, would have been a confirmation, and would have been confirmed repeatedly by my encountering other idyllic places over my lifetime.
What I knew -- what I felt to be true for myself as a 14-year old girl -- was that an ideation did not, and likely would never, sustain me. But I could suddenly see how it could be sustaining to others.
And what I recognized so much later, at age 38, is that moments of quiet and aloneness were the thing I craved most (and enjoyed with delicious abandon) as a child. Time away from my large family provided clarity and calm; time alone generated wider thoughts and more compassion for others than time with them ever did. And now here I was, all grown-up, alone in my studio, standing silently in front of an empty canvas. Gazing.
And after a time, the canvas became inhabited by a summer day when something made sense and I felt connected to the lives of others even though I was alone. And the canvas became, in turn, every known place, every clear thought, every memory, every loss -- the moments and elements that have clustered to form my own sustaining idea.
And my hand reached out for a tool. And colors got chosen, and forms took shape. And when it was done, clear, balanced, enough, it was done. A painting of a place.
Posted by Martha Hope Carey at 6:23 PM