Whites at the End of Their Time 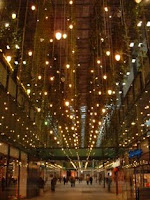 Pragmatic philosopher Richard Rorty's liberal ironist engages in self-creation as a way of living a purposeful life, as metaphysical considerations (or supernatural forces, or promises of what happens after you die) play no definitive part in waking life. In bad dreams maybe, but not in waking life.
The liberal ironist is aware of their own context, of their own moment in cultural time; this person is not living to leave a legacy, or to appease a god, or to avoid hell. And since the languages (meanings, references, contexts, histories) this person comprehends are reality, this person is continually aware of the morphing of language use, manipulation, and rules.

Most compelling for me, on re-reading Rorty, was what he makes of an ironist striving to not be limited (I paraphrase) by the language use/context making/tradition of their upbringing. And just how does one not remain limited by the values, speech, context, and the "known knowns" in the world of one's parents and their cohorts? By expanding acquaintances, by expanding experience, by becoming aware of the connection between persuasive words and cruelty (which a liberal ironist abhors), and by expanding one's own language use.
This expansion process is a pain in the ass, and disconcerting, and means continual revision and revisiting of what one thought one knew. And it is also joyful, liberating, and awe-inspiring. Because the sheer volume of ways of being and ways of thinking among humans is staggering.
Recently I have spent some time with people for whom status competition is what life is about, and what they talk about is 1) the stuff they have, 2) the stuff they want their children to have, and 3) the hopes they have for acquiring more stuff. I have also spent time recently around cause-and-effect thinkers, for whom artmaking or meaning making is quite humdrum, since talking about the cosmos (and how complex a puzzle this is to decipher) is far more engaging than talking about anything a human could make. And I have been listening to the talk of deeply religious people recently too, and I hear them as bonded in submission, and bounded by moral illusions.

And this last reflection led me back to an article written a few years ago by Stephen Pinker, on "The Moral Instinct." In the article, Pinker discusses how social and neurological research has shown that "our heads can be turned by an aura of sanctity, distracting us from a more objective reckoning of the actions that make people suffer or flourish. It seems we all may be vulnerable to moral illusions, the ethical equivalent of the bending lines that trick the eye on cereal boxes..."
Moral illusions are the blankets of mental safety we wrap ourselves in; moral illusions are the "universal" rules or laws that people claim exist and to which each individually clings to, or thinks other people should adhere to (like supporting racial segregation policies, or saying homosexuality is wrong) and they are almost always bound by an historical context. They are also often a justification for cruelty. And we don't tend to reason these moral illusions out, we instead engage in moral rationalization -- we "begin with a conclusion, coughed up by an unconscious emotion, and then work backward to a plausible justification."
Of course I wonder why (biological imperative, survival instinct, communal understanding?) we are wired to be susceptible in this manner, and lots of research is going on in that arena, I am sure. But Pinker sums up that, in our current understanding of this process, "our habit of moralizing problems, merging them with intuitions of purity and contamination, and resting content when we feel the right feelings, can get in the way of doing the right thing." This is a compelling question, why we seem wired to let "unconscious emotion" impair ethical, respectful, community-minded acts.
And that last thought led me back further, to a short piece by David Kirp about the Supreme Court's 2007 decision nullifying race/diversity as a factor in the assignment of students in public schools. Offering a reflection on the Court's moral thinking and language use in that decision, UCLA Prof. Gary Orfield said "This is the last generation of Euro-American leadership in the country...and we are blowing it. We're not creating a unified culture. Instead we are polarizing the country. Down the road this will be an extremely puzzling decision -- it shows the craziness of whites at the end of their time."
I keep that quote on a wall in my studio, since that is a context that resonates for me, as a denizen of this time.
A footnote: Artist/sculptor Louise Bourgeois, she of the disconcerting mom-as-spider sculptures -- and a clear-sighted creative force who seemed to not suffer from moral illusions, and continuously revisited and revised her world of self -- died yesterday, at 98.
Posted by Martha Hope Carey at 1:49 PM