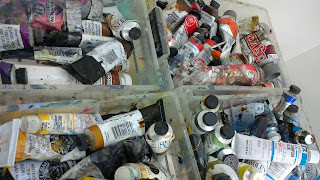 Reading science fiction tends to reaffirm for me that the law of mass-energy conservation (that there is a constant amount of both in the universe, and the two can interconvert) really applies to all things emotional as well. In emotional exchanges you also have products and reactants and, as in all things universe-physics-Einstein-y, the energy generated in such an exchange exists and goes ... somewhere. It does not suddenly just blink out. But the rub is always, where is the somewhere? Who does it land on, sink into, impact, or change?

And what about the sub-level stuff, the actual electron level stuff -- is it possible that there really are humans who are inviolate energy expellers, never absorbers? Which of course would have to mean there are an equal opposite number (well, in pristine physics thinking, anyway) of energy absorbers. Does one get trained for this in childhood, I wonder, or is it really a genetic thing? And if it is genetic, can we develop a sci-fi kind of solution, some trippy procedure, which might reverse one's 'natural' state as expeller or absorber? I wonder about just who would sign up for that.

To me science fiction is psychology, abstracted out; sci fi makes it easier to face the limits and constraints of human being-ness in the present moment. Unlike, say, classic murder mystery novels, which offer psychology parsed out; killers have clear motives (well, most of the time), pain is pain, there are specific steps to redemption, and closure is possible. Both offer a kind of weird comfort.

They seem to always be about closed systems, though, about emotional constants that must balance, as hope with despair, violence with calm, imaginative leaps with limits. Because we all are in a closed system, causing and reacting, expelling and absorbing. Which makes me wonder how many writers are more absorber than expeller, or vice versa. And about what it would be like to inhabit my opposite number out in the world. I feel like this is a deep failure of imagination on my part; I find it much easier to spend time imagining the inner lives of absorbers, generally. Because I am pained by expellers, especially the truly oblivious ones, I feel a lot of anger and lack of trust about them. The energy has to go somewehere, after all. But I want very much to be able to imagine the joy expellers must experience. They must go through time and space with such lightness.

I know now that painting is an interconversion. Looking over my work over the past dozen years recently, I came across a fuzzy photograph of the first painting I ever sold...I had a seriously crappy camera at the time. The piece was called 'Found, grounded' and I painted it, and sold it, in 2002. It was actually four small canvasses (16x16 each) composed as one piece, and I painted it in early 2002 while my studio was set up in a tiny section of the tiny living room area in our tiny apartment in Seattle. A friend of a friend very kindly allowed me to hang some of my work at a coffeehouse downtown (I had just started painting about 6 months before) and a writer, visiting town from Chicago for a few days, saw the painting and wanted it immediately. I met her when I delivered the packed-for-the-plane painting to her, and she told me she had to have the painting hanging on her wall above her writing desk, that it would fuel her.

What the painting was to me -- the discovery that I had found that I could paint, and that this could be my work, my life -- seemed evident to this writer, without me explaining it. But in truth it mattered not at all to her, and rightly so. What mattered to her was the way she felt when she looked at 'Found, grounded' and the way she knew she would always feel when she encountered the piece. I have met only a handful of the people who have bought my paintings over these past 13+ years, but she fits with what I know of the others. They are absorbers too.

Posted by Martha Hope Carey at 6:00 PM No comments: