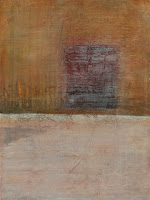 From what I can recall from childhood, Connecticut summers regularly featured thunderstorms in surround-sound, and the humidity made the season feel like it was always on you, not around you. The summers I spent in Minnesota as a 20-something were the antithesis; you could see the thunderheads building from across the flat, and you could watch the sky turn from blue to green to black, storm directly over you, and then quickly reassemble its calm blue face.
The clouds in Minnesota bundled together at the end of the day and were pulled offstage like a cluster of balloons. The sky in Connecticut was more like the pale-hued wall of a hospital or a school, a wall propped up between you and the Long Island Sound. Some days were grey/blue, some grey, some white. And at night the cloud wall would stretch out to the horizon and settle into a deeper grey. The sky was never fully dark -- too much ground light from the densely packed suburbs, and from Manhattan, 30 miles away -- and never really clear enough to see many stars.
The beach in our town was built on a point jutting out into the Long Island Sound, so that even though the coastline ran along the town's southern edge, you could go to the point and stand on a beach and look east, out to the imagined Atlantic and then Spain and then Mongolia. Or you could stand on another stretch of beach and look southwest and (squinting) see the skyline of lower Manhattan, or you could stand on another small beach and look straight south, across to the mundane mirror shoreline of Long Island. This was the unchanging geography of my childhood.
The geography of adulthood is still being mapped. The sky in Wyoming on a September night was overflowing with stars, and I felt, looking up, as if I was falling into a pool of crystals -- just as my husband had promised I would. I don't recall the sky from my years in Boston; I spent that time looking down, or sitting in a class, or waiting for the T. The sky over Philly in the summer was dense and pale and enclosing, like the damp Connecticut sky, only moreso. And our first summer in northerly Seattle, it seemed as if the sky just moved from blue to deep blue to indigo, though the pines blackened at night.
The latest point on the map is here, in Northern California, south of foggy San Francisco, west of the scorching central valley, a spot between the muggy bay to the east and, to the west, the foothills that hold the seawall back at night. There are stars, and deep blues, and on a full moon, the water around Santa Cruz pier looks as silver and shiny as mercury. There are so few clouds.
I can't see the weather coming from afar, here, but I can smell the smoke of distant wildfires. And on the rare days when it's humid and the wind blows the right way across the bay, the air has a familiar salty tang. I am still unaccustomed to the colors here, having grown up in a world that was, in every possible way, a muted palette (the milky purple crocuses coming up by the church on the hill on the Post Road counted as "vibrant" there) and having just lived for years in the northwest, where it seemed everything but the sky was some tone of green.
Even my car looks like a different color here, a funky super-infused purple. And the gardens in my neighborhood are ridiculous with reds. My eyes are newly saturated with the intensity of color and the yellow-white daylight of the here that has always been here (so different than the cool white of Minnesota days) and this makes me weep with relief.
Posted by Martha Hope Carey at 5:07 PM