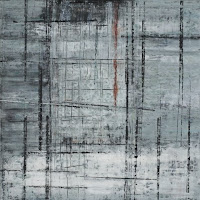 I had only shot a weapon once before, waaaay back in summer camp, in a riflery class. This was in the green, leafy, sleepy foothills of the Adirondacks: a row of tiny little 12 year-old girls all splayed flat on a modified back porch with little rifles in our little hands, taking squinting aim at a round multi-colored target which seemed as far away as Pluto. I recall propping myself on my elbows, aiming, and missing repeatedly; I came away from that experience with blistered elbows, no interest in riflery, and an irrational concern that I would likely be blind by the time I was middle-aged.

Flash forward to middle-age. The eyesight is worse but not gone, and there was no camp this summer...but I did go shooting, with my husband and two friends. I shot an automatic, a Glock 9, at an indoor firearm shooting range in the suburbs. I shot it exactly twice. The two bullet casings jumped from the gun and pinged me after I shot -- one on my forehead, one on my right thigh. My  target (the outline of a human form) was set seven yards away. With my first shot, I hit him just above the breast and under the collarbone on the right side. I had never held or fired a handgun before in my life.

The gun range we visited was in a bland one-storey building near a suburban mall, just off a main drag. The place was packed when we were there, each lane in the range was full and there were folks waiting to get in. Just inside the front door we were confronted by the pre-entry missive, written on a blackboard, declaring proper gun use and lawful gun owners as altogether different from "what happened in Aurora."

We walked down one aisle of ammo, and one aisle of rifles, and then reached the the firearm cases, where we were directed to choose a weapon or two from the 100 on display for use in the range. Then we were told to pick out paper targets. The options: circles, an outline of human form, zombies, a picture of a guy who looked a lot like Freddie Mercury pointing a gun, a picture of a guy who looked like the unibomber holding a white woman at gunpoint, or a big headshot of Osama bin Laden.

When our turn came we set up our targets in two lanes. The guy in the lane to my left had been there a while. He was shooting a semi-automatic rifle of some kind, and the bullet casings, dozens of them, came flying through the break in the wall between the two lanes and popped us all in the shins. His girlfriend stooped behind him while he shot and methodically picked up the rest of the stray casings in his lane. We wore earplugs and headphones, but the sound was defeaning. The smell was overpowering as well.

Shooting an automatic weapon is easy as pie. You don't even look at the target, just at the sight; you line up the line with the circle and pull the trigger. The gun just makes the complete disconnection between thought and action, or action and consequence, seamless and undisruptive.

Everything about the experience -- from entering a building full of guns and ammo to holding an unloaded Glock to loading the gun to firing -- was terrifying on a personal level. This was not so much a fear of something bad happening, though I am sure some of it was in there, but rather a fear of being in a place where people may not understand how to use their power. I sure as hell didn't understand how to use that power. And, generally, as a female survival trait, I don't go to places where lots of men congregate around activities that disconnect them from thought and consequence.

But another fear kicked in after I (quickly) shot those two bullets. I immediately saw the target as a man, and saw the bullet hole I had made in him, and realized that I could have just killed someone.

"So what" the other folks at the range might say, "you'd shoot them in real life if they had it coming, don't kid yourself, it's a dangerous world, you live in a dangerous city." I swear that mantra was playing subliminally in the background at the gun range -- that, and the other subliminal message about white people lawfully protecting their own.

I have had a lot of vehement and sometimes complex opinions about the idiocy of war, violence, and guns as an adult. I have voiced those opinions based on assessment as well as supposition, but not on anything "real." And one could argue I am still in that place, as I will never be a solider or a cop, and have never used, or carried, a gun out in public, outside of the structures and strictures of a gun range.

But I didn't really go to a gun range to have the experience of firing a gun.

I went along to see how it feels, for myself and more importantly for all the others there -- to be in a community, even for an hour or two, of people who get pleasure using guns. Because firing guns is pleasurable, and even fun, to those who "practice" at the range. The sounds, the smells, the companions, the purpose are all pleasurable. Like enjoying your favorite drug, or other things one could name. They do it because they like how it feels.

And the social exchange in that place, as with anyone who is a gun owner, is about that feeling, I know now, not about anything else. There really is no coherent intellectual defense against a thing that people do because they want to have a particular feeling, other than to contain that pleasure-seeking behavior if it infringes on the rights of others in a detrimental manner.

But that is the terrible beauty of (and likely the original intent of the development of) guns. They contain your attention so completely, so quickly; there is no other to even imagine you are infringing upon.

There is just you, and your weapon, and lining up the sights, and squeezing. The only consequence is a blistered elbow. Or a bullet casing tapping you on the forehead, leaving a small smudge of lead above your eyebrow, and then falling gently to the ground.